Please click at the following links for our Englsih Contents：

An act that produces effective surprise [is] the hallmark of the creative enterprise.

It is essential, here to distinguish between creativity and originality. In a sentiment that brings to mind Twain’s famous assertion that plagiarism is the seed of creative work, Alexander Graham Bell’s conviction that “our most original compositions are composed exclusively of expressions derived from others,” and Henry Miller’s poetic debunking of the originality illusion, Bruner cautions:

The road to banality is paved with creative intentions. Surprise is not easily defined. It is the unexpected that strikes one with wonder or astonishment. What is curious about effective surprise is that it need not be rare or infrequent or bizarre and is often none of these things. Effective surprises … seem rather to have the quality of obviousness about them when they occur, producing a shock of recognition following which there is no longer astonishment.

He goes on to outline three kinds of effectiveness in surprise.

Predictive effectiveness is “the kind of surprise that yields high predictive value in its wake” — for instance, as in the most elegant formulae of mathematics and physics, which hold that whenever certain conditions are present, a specific outcome is guaranteed to be produced. (All of these 17 equations that changed the world are excellent examples.) Predictive effectiveness doesn’t always come through surprise — it’s often “the slow accretion of knowledge and urge.” And yet, Bruner argues, “the surprise may only come when we look back and see whence we have come” — the very thing Steve Jobs described in his autobiographical account of his own creative journey, in noting that “you can’t connect the dots looking forward; you can only connect them looking backwards.”

Bruner’s second form is formal effectiveness, the kind most frequently encountered in mathematics and logic, and occasionally music. He cites French polymath Henri Poincaré’s famous account of how creativity works, which holds that “sudden illumination” — the mythic Eureka! moment — is the unconscious combinatorial process that reveals “the unsuspected kinship between … facts, long known, but wrongly believed to be strangers to one another.” （see column below）

The third, Bruner notes, is the hardest to describe. Metaphorical effectiveness is also manifested by “connecting domains of experience that were before apart,” but what distinguishes it from the formal kind is that the mechanisms of connectedness come for the realm of art rather than science and logic — the kind of connectedness that Carl Jung described as “visionary,” in contrast to the merely psychological.

(Metaphorical thinking, after all, is at the developmental root of human imagination.)

While we are wired to make sense of the world via categorization, “metaphoric combination leaps beyond systematic placement, explores connections that before were unsuspected.”

The unifying mechanism for all three, however, remains what Einstein termed “combinatory play.” Bruner writes:

All of the forms of effective surprise grow out of a combinatorial activity — a placing of things in new perspectives. （Source：https://www.brainpickings.org） 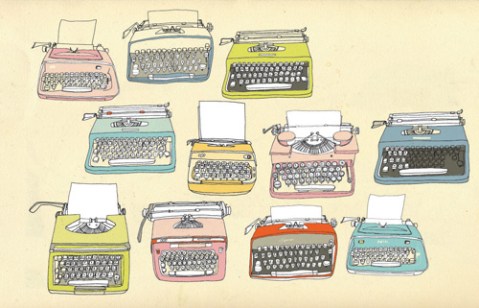 Born in Hiroshima, 1975. Shintaro Ohata is an artist who depicts little things in everyday life like scenes of a movie and captures all sorts of light in his work with a unique touch: convenience stores at night, city roads on rainy day and fast-food shops at dawn etc. His paintings show us ordinary sceneries as dramas. He is also known for his characteristic style; placing sculptures in front of paintings, and shows them as one work, a combination of 2-D and 3-D world. 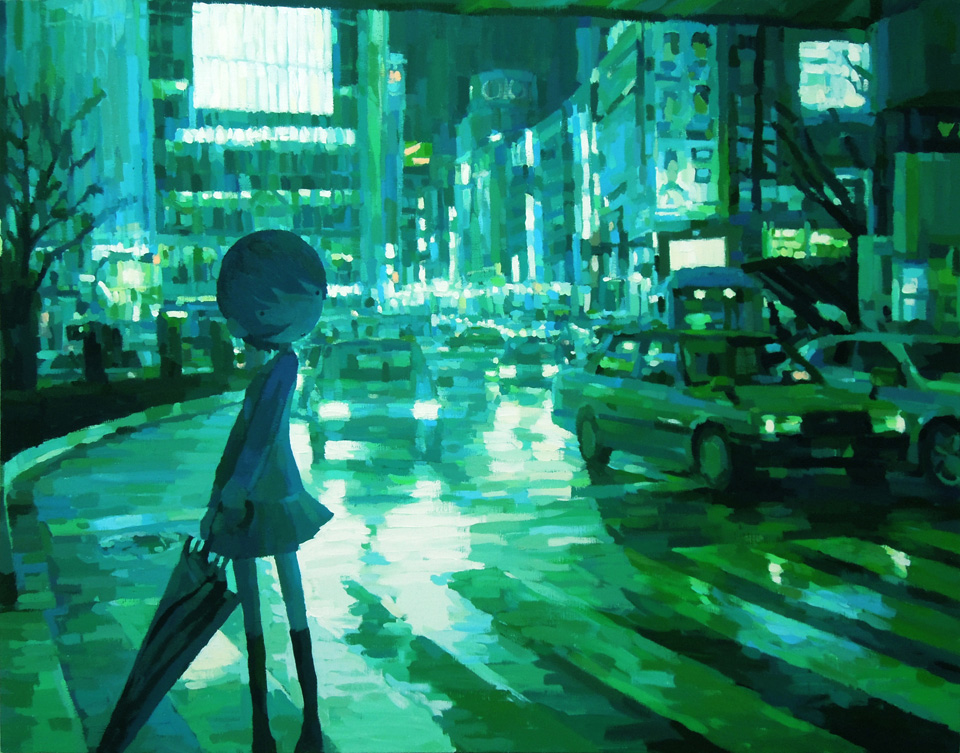 Shintaro Ohata is an artist who depicts little things in everyday life like scenes of a movie and captures all sorts of light in his work with a unique touch: convenience stores at night, city roads on rainy day and fast-food shops at dawn etc. His paintings show us ordinary sceneries as dramas. He is also known for his characteristic style; placing sculptures in front of paintings, and shows them as one work, a combination of 2-D and 3-D world. He says that it all started from when he wondered “I could bring the atmosphere or dynamism of my paintings with a more different way if I place sculptures in front of paintings”. Many viewers tend to assume that there is a light source set into his work itself because of the strong expression of lights in his sculpture. His further steps have been noticed as he has been featured by lots of media from overseas, including a cultural magazine from the USA that featured him on their front cover and a long interview. 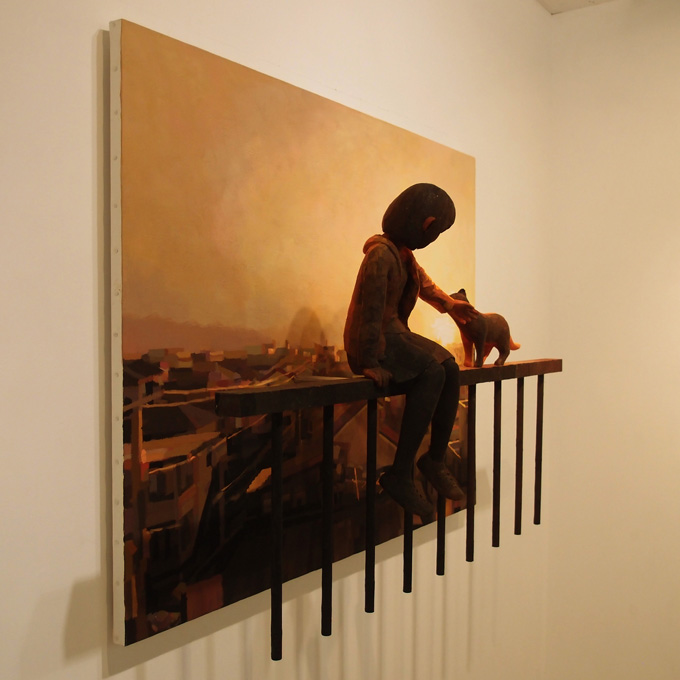 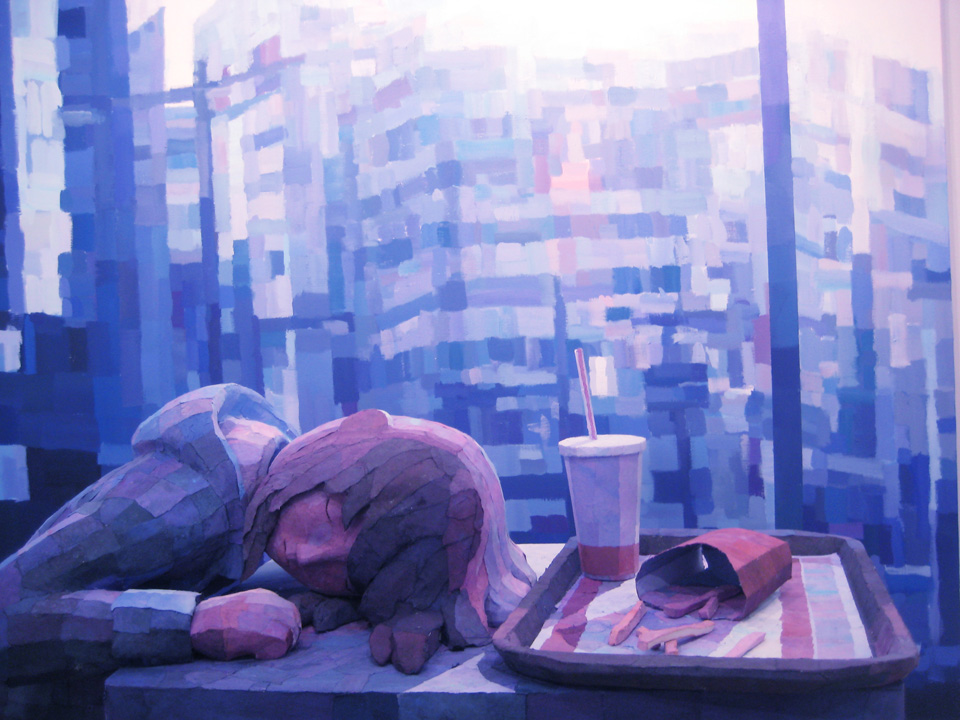 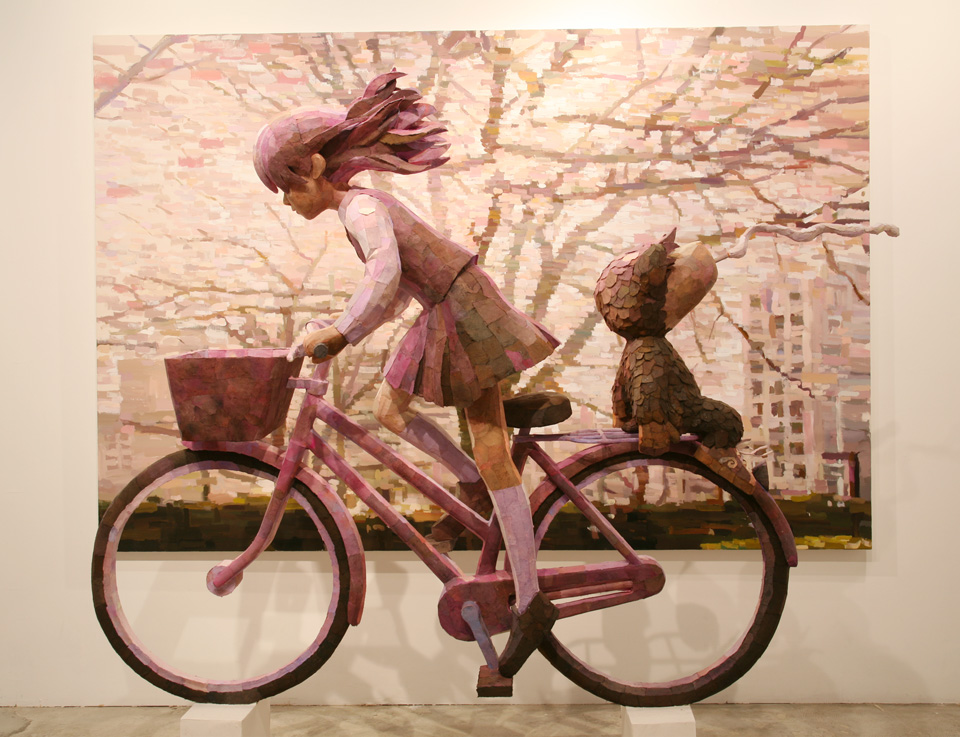 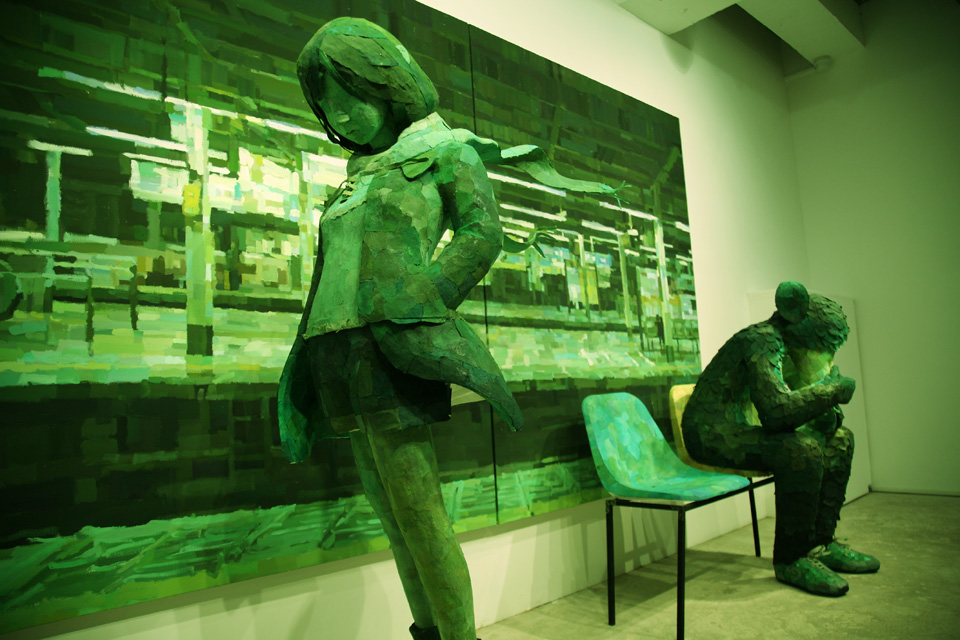 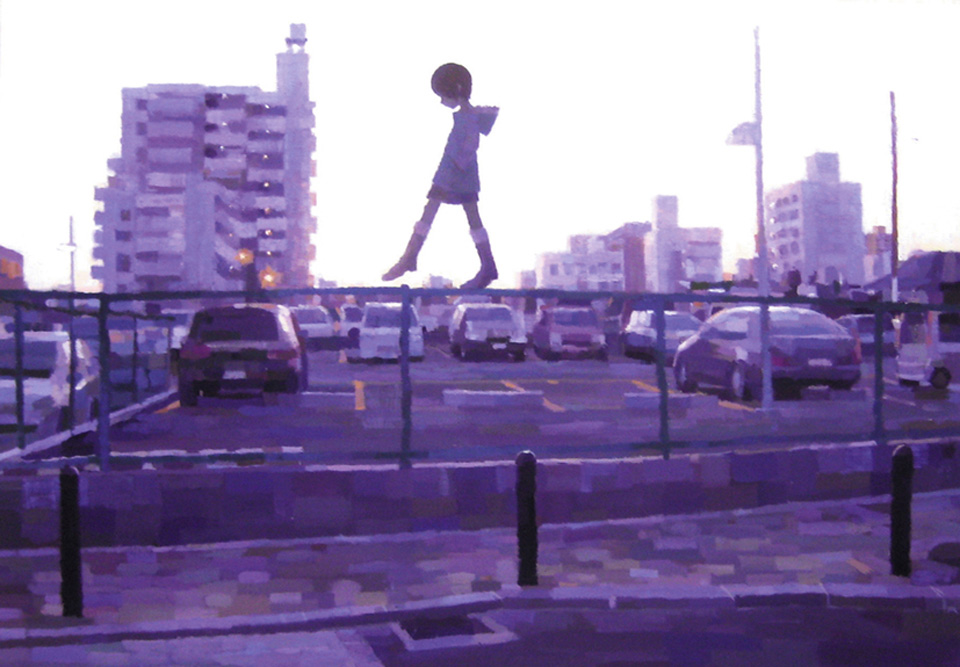 UMBRELLA: IMAGE of a CITY'S STYLE 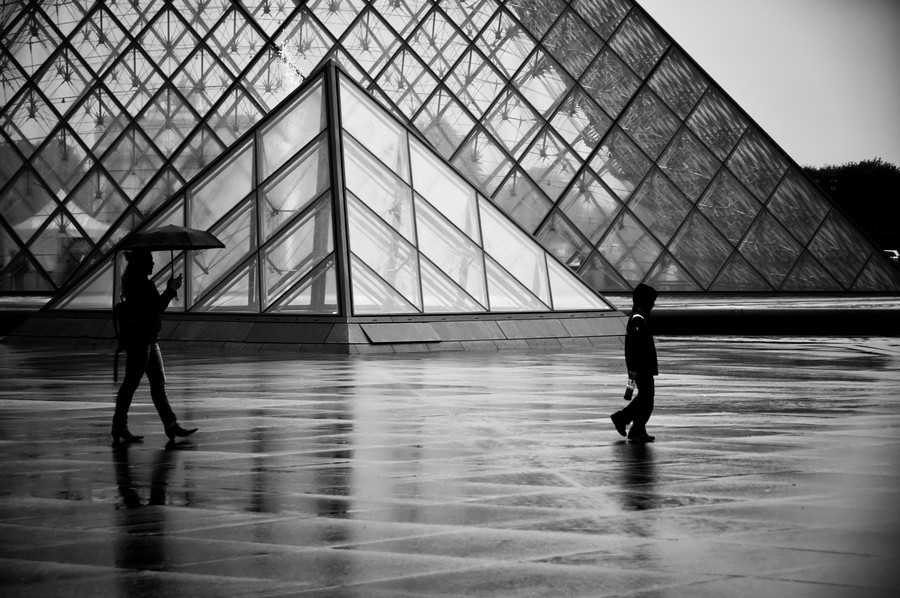 According to the champion and researcher of cultural creative industries in Malaysia, Dr Tan Beng Huat, who is also a fellow member of the renowned Malaysian Institute of Management (MIM), the “character” of a city is defined by its awareness, attitude, style and philosophy it believes in.

It seems no issue in understanding the awareness, attitude or philosophy of a city.

For instance, in Berlin, every Berliner follows traffic light; green you go, orange and red you stop, whether it is 3 in the morning or in the afternoon, for men or vehicles.

Your car just has to stop right in front of red light, even when there is no car coming from the other side in midnight. 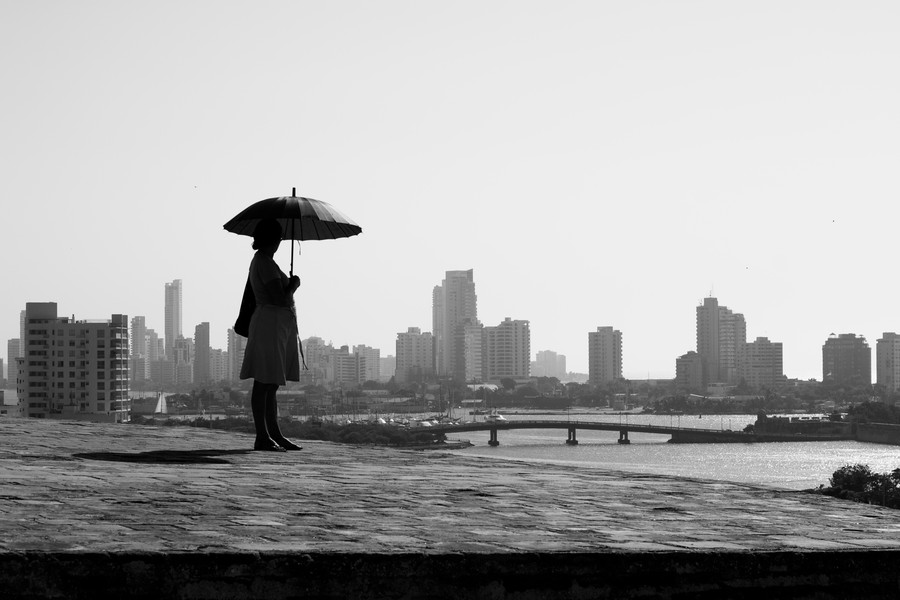 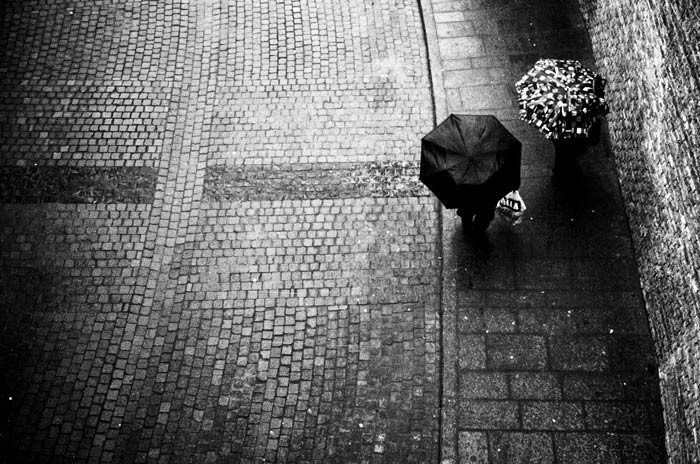 It is obvious, all Germans “aware” or “appreciate” how important it is to be law-abiding. It is part of their disciplines, which often translate into the reliable quality of their manufacture goods such as cars, machineries and electronics.

But, what is style? To be precise, the style of a city? and how does it shape the “character” of a place?

To me, it is simple. Style is defined by the mental image we hold for a city. When I travel to a place, there are usually a few things I would first observe.

Umbrella is one of them. Isn’t it strange enough? 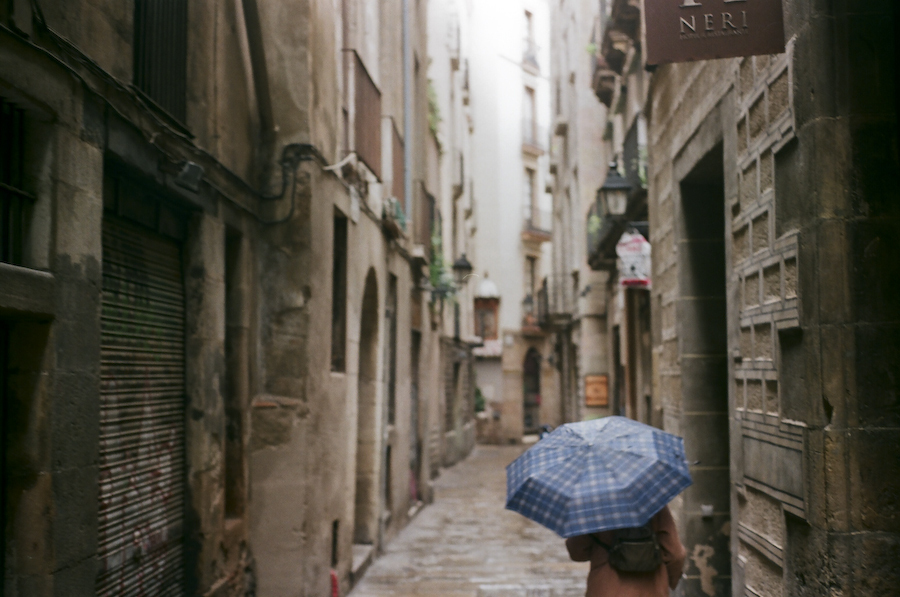 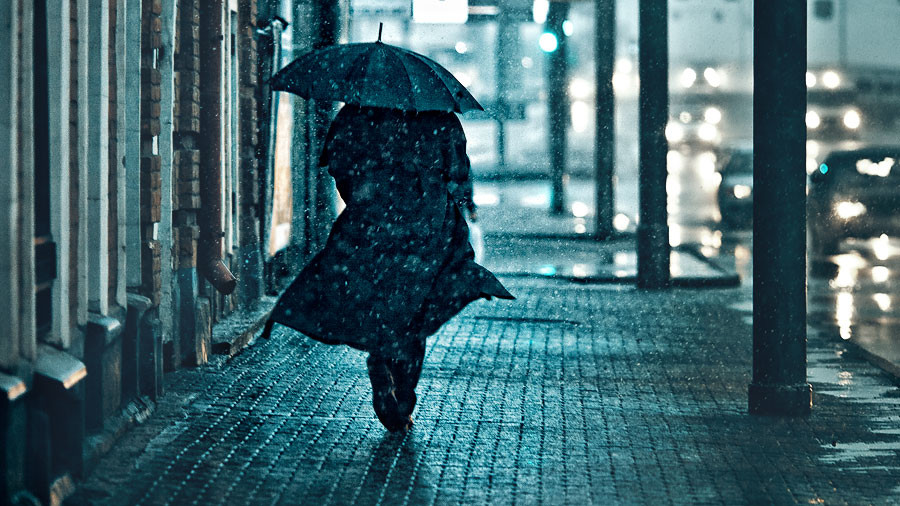 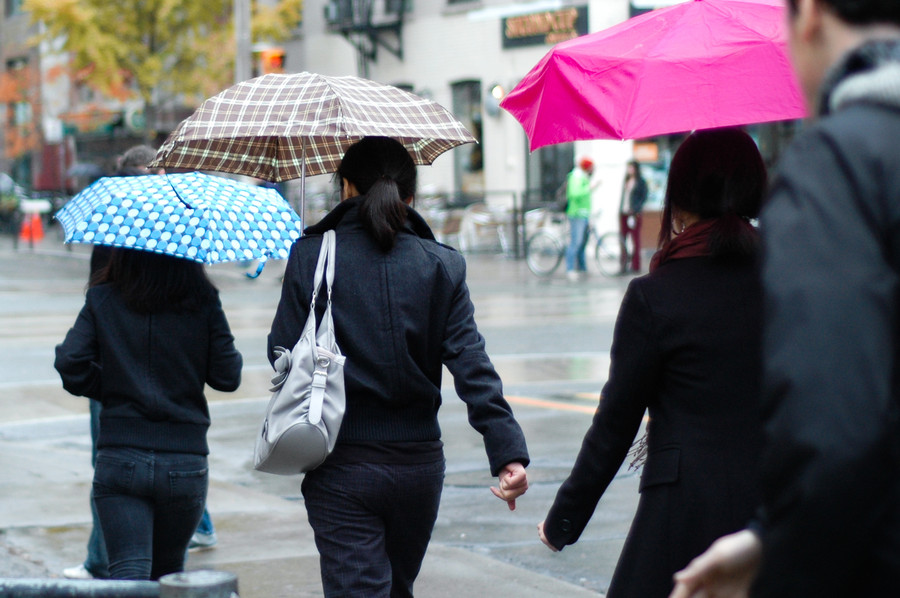 The way people face the weather; how do they go through rain, thunderstorm or hot sun, reflects their contentment or dissatisfaction toward the life in that city.

Are they elegant or in a hush; bitter-faced or look into the sky with a smile?

When most people in that place hold the umbrellas and walk with poise, the scenery can be contagious. We will say to ourselves that, I would like to be part of this city.

On the contrary, when most people are sour-looking, and rush through the weather, you know, how bad, people are not happy at all here!

The style of a city constitutes its attractiveness. With imagination and innovation, the cultural creative activists can help shape peoples’ mental picture towards a city. However, the policy makers must first have the concept of how to make life easier for their citizens. Alex J. Coyne: 7 Lessons In Better Writing From The Beatles

Looking for some writing advice and inspiration? In this post, we include seven lessons in better writing from The Beatles.

When measured by album sales and song downloads, The Beatles were one of the biggest bands in existence. Yesterday is the world’s most covered song, and other tracks written by the Fab Four are familiar to most people who will read this.

While their official end came in 1970, their influences continues well into today.

Don’t forget that The Beatles were writers, too. While people see them as musicians, what they sold was their writing.

Writers can learn a lot to improve their writing through The Beatles. If you want to know more about writing that captivates those who hear and read it, they knew some writing tricks.

Go to YouTube, and look up some lyrics before reading further. Start with Strawberry Fields Forever, Help, or I Want To Hold Your Hand. Some were rock, some were blues, and others were radio-friendly – a couple were very unusual.

Here’s what writers can learn from the writing of one of the greatest groups to exist.

Briefly, About The Beatles

Albums including Yellow Submarine, Abbey Road, and A Hard Day’s Night are credited to the band. Popular, individual songs are too many to list here.

The Beatles still have an incredible influence on art, popular culture, and creativity. Their work is popular, everlasting, and original. Their work is inspiring, written about often, and discovered by new fans every day.

Do you want people to see your writing like this someday?

Learn from the Beatles just as much as from traditional writing role models like Stephen King.

They knew how to write.

7 Lessons In Better Writing From The Beatles

There are many writers who look to primarily fiction or non-fiction authors for inspiration. Include scriptwriters and lyricists in your list, even if you do not write in the same media which they do.

Here’s where to start exploring the Beatles:

1. How To Use Your Words

The Beatles were responsible for the lyric ‘I am the walrus’.

People are still debating what it could have meant. But it’s still catchy enough to have sold millions of copies – and inspired thousands of other artists.

As a writer, your greatest tool is using (and often bending) the capacity of language. Words influence a lot of things, including mood, and a writer’s tone.

Does it mean that you have to use flowery, embellished language every time you write? No, not necessarily. But writers should always use language with just a dash of creativity that sets them apart from other writers in the world.

Know language, and aim to get to know it better as a writer every day.

It worked for the Beatles, and it can work for you.

2. Writing Great Titles Is As Important As The Hook

A title is responsible for what makes a reader continue, get hooked, or read something else.

The Beatles knew the power of writing great titles.

On paper, the titles are powerful on their own.

As a writer, that is what you should aim to achieve.

Writing elements like the hook, the first paragraph, and the last sentence are just as important as writing a great title.

3. Remember To See The Business Side Of Writing

John Lennon reportedly once told another band member that it was time to ‘write a swimming pool.’

While that was pretty blunt, it describes what writers should know about the business side of their writing.

See pitches and sold work as business capital as a writer. After all, your words are worth money. Every word counts, especially when the writer intends to sell any of them.

The Beatles had a knack for great stories within their songs.

Read the lyrics of songs like The Ballad Of Rocky Raccoon, or Strawberry Fields Forever. Eleanor Rigby and even Can’t Buy Me Love are good examples of their storytelling capacity.

There are beginnings, middles, and ends. Distinct ones, and each song tells a story to the listener or reader.

As a writer, you should aim to make your writing always achieve this.

Excellent fiction and non-fiction writing means you should always work on better beginnings, middles, and endings..

5, Ideas Can Come From Anywhere (At Any Time)

The original idea for Yesterday came from a catchy melody and Paul McCartney singing the words ‘scrambled eggs’ to it. Creativity is a strange thing. It can strike at any time, and a writer has to be ready to seize the moment (or set out a time for pitching and writing every day) to keep ideas flowing.

The song Yesterday is credited as the most covered and recorded song in history. That’s really something, and it started with a very basic core idea.

Keep all your ideas. Don’t discount the weird ones. They might just be the ideas that work well with readers – and remember that the best ideas can, indeed, come from some very weird places.