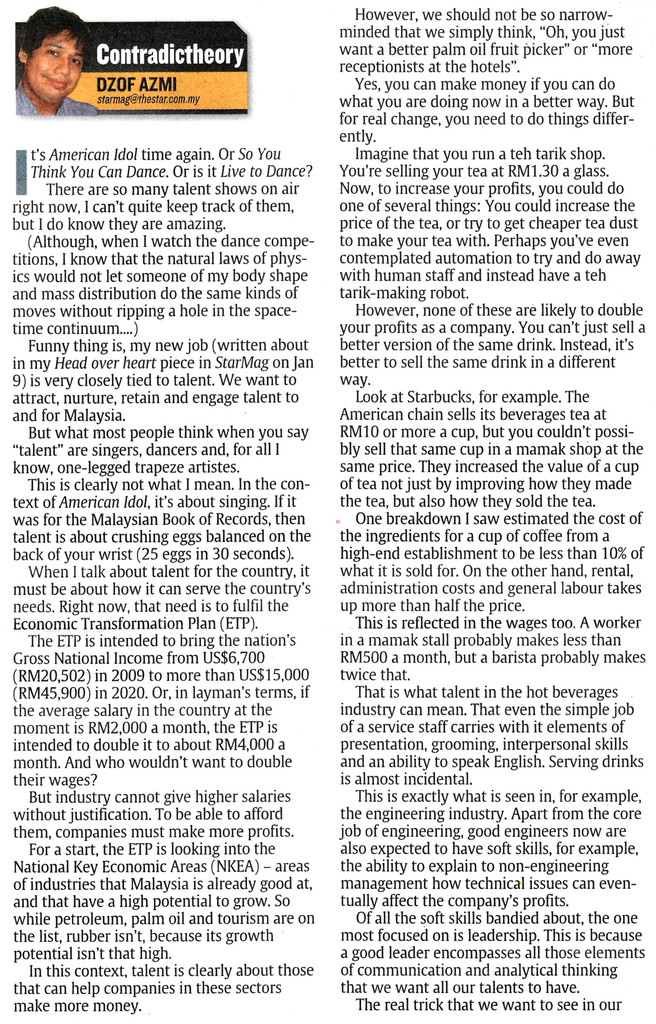 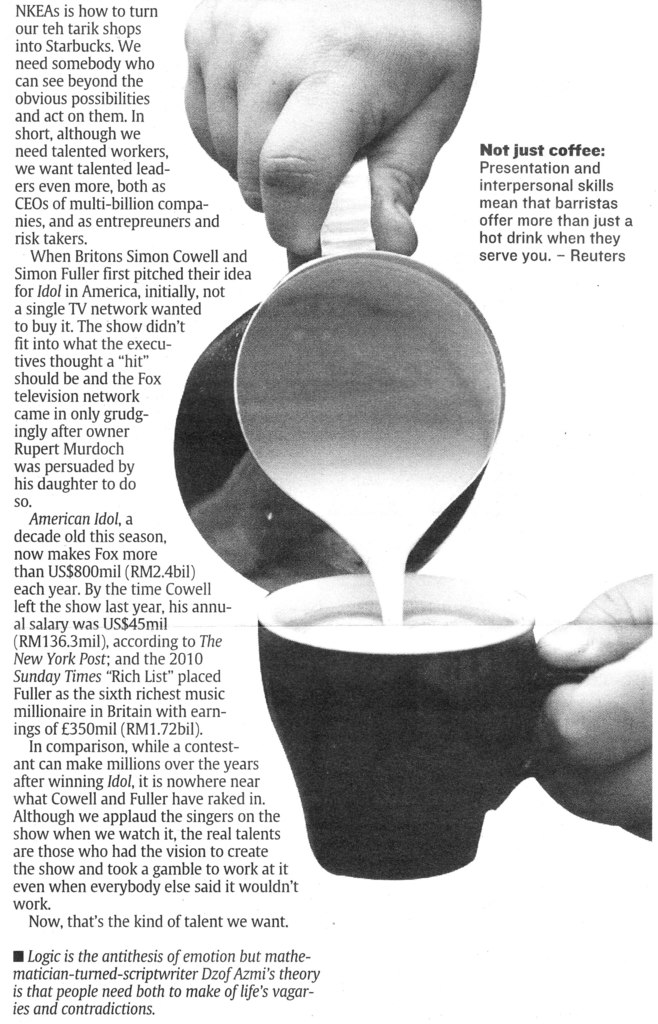 Singers and dancers are fine. But the true skills Malaysia needs are initiative, vision and leadership.

It’s American Idol time again. Or So You Think You Can Dance. Or is it Live to Dance?

There are so many talent shows on air right now, I can’t quite keep track of them, but I do know they are amazing.

(Although, when I watch the dance competitions, I know that the natural laws of physics would not let someone of my body shape and mass distribution do the same kinds of moves without ripping a hole in the space-time continuum....)

Funny thing is, my new job (written about in my Head over heart piece in StarMag on Jan 9) is very closely tied to talent. We want to attract, nurture, retain and engage talent to and for Malaysia.

But what most people think when you say “talent” are singers, dancers and, for all I know, one-legged trapeze artistes.

This is clearly not what I mean. In the context of American Idol, it’s about singing. If it was for the Malaysian Book of Records, then talent is about crushing eggs balanced on the back of your wrist (25 eggs in 30 seconds).

When I talk about talent for the country, it must be about how it can serve the country’s needs. Right now, that need is to fulfil the Economic Transformation Plan (ETP).

But industry cannot give higher salaries without justification. To be able to afford them, companies must make more profits.

For a start, the ETP is looking into the National Key Economic Areas (NKEA) – areas of industries that Malaysia is already good at, and that have a high potential to grow. So while petroleum, palm oil and tourism are on the list, rubber isn’t, because its growth potential isn’t that high.

In this context, talent is clearly about those that can help companies in these sectors make more money.

However, we should not be so narrow-minded that we simply think, “Oh, you just want a better palm oil fruit picker” or “more receptionists at the hotels”.

Yes, you can make money if you can do what you are doing now in a better way. But for real change, you need to do things differently.

Imagine that you run a teh tarik shop. You’re selling your tea at RM1.30 a glass. Now, to increase your profits, you could do one of several things: You could increase the price of the tea, or try to get cheaper tea dust to make your tea with. Perhaps you’ve even contemplated automation to try and do away with human staff and instead have a teh tarik-making robot.

However, none of these are likely to double your profits as a company. You can’t just sell a better version of the same drink. Instead, it’s better to sell the same drink in a different way.

Look at Starbucks, for example. The American chain sells its beverages tea at RM10 or more a cup, but you couldn’t possibly sell that same cup in a mamak shop at the same price. They increased the value of a cup of tea not just by improving how they made the tea, but also how they sold the tea.

One breakdown I saw estimated the cost of the ingredients for a cup of coffee from a high-end establishment to be less than 10% of what it is sold for. On the other hand, rental, administration costs and general labour takes up more than half the price.

That is what talent in the hot beverages industry can mean. That even the simple job of a service staff carries with it elements of presentation, grooming, interpersonal skills and an ability to speak English. Serving drinks is almost incidental.

Of all the soft skills bandied about, the one most focused on is leadership. This is because a good leader encompasses all those elements of communication and analytical thinking that we want all our talents to have.

The real trick that we want to see in our NKEAs is how to turn our teh tarik shops into Starbucks. We need somebody who can see beyond the obvious possibilities and act on them. In short, although we need talented workers, we want talented leaders even more, both as CEOs of multi-billion companies, and as entrepreuners and risk takers.

When Britons Simon Cowell and Simon Fuller first pitched their idea for Idol in America, initially, not a single TV network wanted to buy it. The show didn’t fit into what the executives thought a “hit” should be and the Fox television network came in only grudgingly after owner Rupert Murdoch was persuaded by his daughter to do so.

American Idol, a decade old this season, now makes Fox more than US$800mil (RM2.4bil) each year. By the time Cowell left the show last year, his annual salary was US$45mil (RM136.3mil), according to The New York Post; and the 2010 Sunday Times “Rich List” placed Fuller as the sixth richest music millionaire in Britain with earnings of £350mil (RM1.72bil).

In comparison, while a contestant can make millions over the years after winning Idol, it is nowhere near what Cowell and Fuller have raked in. Although we applaud the singers on the show when we watch it, the real talents are those who had the vision to create the show and took a gamble to work at it even when everybody else said it wouldn’t work.

Now, that’s the kind of talent we want.

■ Logic is the antithesis of emotion but mathematician-turned-scriptwriter Dzof Azmi’s theory is that people need both to make of life’s vagaries and contradictions. (June 5, 2013)

Comment by O noc Sob on June 30, 2011 at 1:19pm
Unfortunately, we are not do well at all to use our brain, whether logical or emotional side of our faculty. We end up with "tidak apa" or " don't be bother" attitude, which seriously affecting our vocation and life itself.

Comment by O noc Sob on June 30, 2011 at 1:16pm
We need a balanced integration between the logical/sequential left brain and the emotional/jumping right brain.