Please click at the following links for our Englsih Contents：

Kapit, which means 'twin' in local dialect, is the capital of Sarawak's Seventh Division, through which flows the Rejang River and its main tributaries, the Batang Baleh, Batang Katibas, Batang Balui and Sungai Belaga. In a treaty with the Sultan of Brunei, Rajah James Brooke acquired the Rejang Basin for Sarawak in 1853. Kapit is the last big town on the Rejang and styles itself as the gateway to 'the heart of Borneo', after Redmond O'Hanlon's Into the Heart of Borneo, which describes his adventure up the Batang Baleh in the 1980s. Kapit is full of people who claim to be characters in this book. The main sights are Fort Sylvia and the Kapit Museum but, like O'Hanlon and his journalist companion James Fenton, most visitors simply use the town as a pit stop before continuing their adventures into the interior to explore the upper Rejang and its tributaries, where there are many Iban and Orang Ulu longhouses. Maps of the Kapit Division and other parts of Sarawak are available from the Land Survey Department. Permits for upriver trips are available from the government administration centre, which is outside town near the old airport. Tourists going up the Balleh River or Upper Rejang must sign a form saying they understand they are travelling at their own risk.

There are only a few tens of kilometres of surfaced road in and around Kapit, but the small town has a disproportionate number of cars. It is a trading centre for the tribespeople upriver and has grown enormously in recent years with the expansion of the logging industry upstream. Logs come in two varieties: floaters and sinkers. Floaters are pulled downstream by tugs in huge chevron formations. Sinkers - like belian (ironwood) - are transported in the Chinese-owned dry bulk carriers that line up along the wharves at Kapit. When the river is high these timber ships are able to go upstream, past the Pelagus Rapids. The Rejang at Kapit is normally 500 m wide and, in the dry season, the riverbank slopes steeply down to the water. When it floods, however, the water level rises more than 10 m, as is testified by the high-water marks on Fort Sylvia. 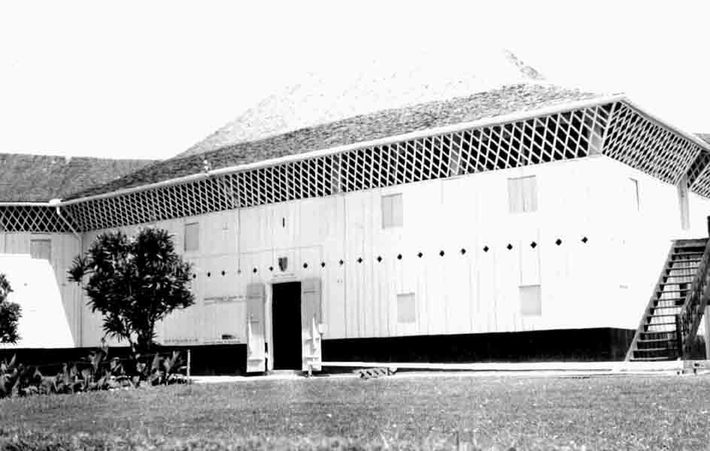 Fort Sylvia (Photo Above) near the wharves was built of belian by Rajah Charles Brooke in 1880, and is now occupied by the Kapit Museum. It was originally called Kapit Fort but was renamed in 1925 after Rajah Vyner Brooke's wife. Most of the forts built during this time were designed to prevent the Orang Ulu going downriver; Fort Sylvia was built to stop the belligerent Iban headhunters from attacking Kenyah and Kayan settlements upstream.

The Kapit Museum was enlarged in the 1990s and moved to Fort Sylvia. It has exhibits (all labelled in English) on Rejang tribes and the local economy. Set up by the Sarawak Museum in Kuching, it includes a section of an Iban longhouse and several Iban artefacts including a wooden hornbill. The Orang Ulu section has a reconstruction of a longhouse and a mural painted by local tribespeople. An Orang Ulu salong (burial hut), totem pole and other woodcarvings are also on display. The museum has representative exhibits from the small Malay community and the Chinese. Hokkien traders settled at Kapit and Belaga and traded salt, sugar and ceramics for pepper, rotan and rubber; they were followed by traders from Fujian. The Chinese exhibit is a shop. In addition, there are also displays on the natural history of the upper Rejang and modern industries such as mining, logging and tourism.

Kapit has a particularly colourful daily market in the centre of town. Tribeswomen bring in fruit, vegetables and animals to sell; it is quite normal to see everything from turtles, frogs, birds and catfish to monkeys, wild boar and even pangolin and pythons. Note: If you do see animals such as monkeys, pangolins, wild cats or birds, please remember that most of them are protected species and in serious danger of extinction, due to the wildlife 'pet' trade and the rising demand for 'traditional' medicines like ground bone and body parts such as monkey gall bladders. Please do not buy them or in any way encourage this business. 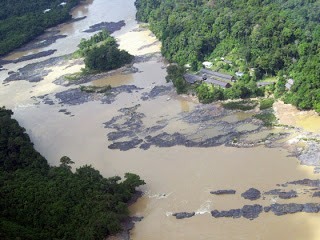 Forty-five minutes upstream from Kapit on the Rejang River, this 2.5-km-long series of cataracts and whirlpools is the result of a sudden drop in the riverbed, caused by a geological fault line. Express boats can make it up the Pelagus to Belaga in the wet season (September-April) and at times of high water the rest of the year, but the rapids are still regarded with some trepidation by the pilots. When the water is low, they can only be negotiated by the smallest longboats. There are seven rapids in total, each with local names such as The Python, The Knife and one, more ominously, called The Grave.

Some longhouses are accessible by road and several others are within an hour's longboat ride from town. In Kapit you are likely to be invited to visit one of these. Visitors are strongly advised not to visit a longhouse without an invitation, ideally from someone who lives in it. As a general rule, the further from town a longhouse is, the more likely it is to conform with the image of what a traditional longhouse should be like. That said, there are some beautiful traditional longhouses nearby, which are mainly Iban. One of the most accessible is Rumah Seligi, about 30 minutes' drive from Kapit. Cars or vans can be hired by the half day. Only a handful of longhouses are more than 500 m from the riverbanks of the Rejang and its tributaries. Most longhouses still practise shifting cultivation; rice is the main crop but under government aid programmes many are now growing cash crops such as cocoa. Longhouses are also referred to as Uma (Sumah) and the name of the headman, ie Long Segaham is known locally as Uma Lasah (Lasah being the chief).

Longhouses between Kapit and Belaga on the upper Rejang river are accessible by the normal passenger boats, but these express boats travel a limited distance on the Baleh River (2½ hours). To go further upriver it is necessary to take a tour or organize your own guides and boatmen. The sort of trip taken by Redmond O'Hanlon and James Fenton (as described in O'Hanlon's book Into the Heart of Borneo) would cost more than RM1800 a head. Large-scale logging operations are currently underway on the Baleh River and although this may increase boat traffic and the opportunities to access this part of Sarawak, brace yourself for a very different experience from that described in Into the Heart of Borneo.

The vast majority of the population, about 68%, in Sarawak's Seventh Division is Iban. They inhabit the Rejang up to and a little beyond Kapit, as well as the lower reaches of the Balleh and its tributaries. The Iban people are traditionally the most hospitable to visitors but, as a result, their longhouses are the most frequently visited by tourists. Malays and Chinese account for 3.4% and 7% of the population respectively. The Orang Ulu live further upriver; the main tribes are the Kayan and the Kenyah (12%) and a long list of sub-groups such as the Kejaman, Beketan, Sekapan, Lahanan, Seping and Tanjong. In addition there are the nomadic and semi-nomadic Penan, Punan and Ukit. Many tribal people are employed in the logging industry and, with their paid jobs, have brought the trappings of modernity to even the most remote longhouses.

Only enter the Rumah Tuan Lepong Balleh longhouse with the local policeman, Selvat Anu, who lives there; ask for him at Kapit police station. During the day Selvat and some members of the longhouse can take visitors on various adventure tours: river trips, visiting longhouses, jungle treks, fishing, pig hunting, camping in the jungle, trips up to logging areas, swimming in rivers and mountain trekking. Selvat is very knowledgeable and has good relations with longhouse communities. Visitors can eat with the family and occasionally have the chance to experience a traditional Iban ceremony.

For Your Eyes Only 0.3 謎樣眼睛