Congratulation to the director of this short film, Tan Ce Ding, 20, who has won the People's Choice Award of  this year's BMW Shorties.

The BMW Shorties was launched in Malaysia in late 2006 as a platform for Malaysian short film makers to explore their talent. Since that time it has become one of the most anticipated annual filmmaking events in Malaysia with BMW Shorties productions travelling to prestigious international film festivals in Cannes, Rome, New York, Rotterdam, Dubai and others. Today it serves both to provide Malaysian filmmakers access to international film making networks and as an unwitting platform for young Malaysians to cultivate their social conscience.

With This 'How To Write I Love You', Tan Ce Ding was voted as one of the Top 10 Finalists of the BMW Shorties 2011 too.

This is the second time he received the Top 10 Finalists Award in the annual event. 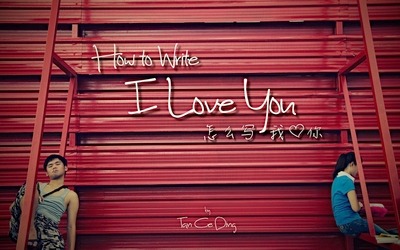 At the same time, ‘Guang’ by Quek Shio Chuan, 25, an inspiring 14-minute short film based on the true story of his autistic brother, was announced as the winner in a night of glitz and glamor at the BMW Shorties 2011 Gala Premiere today. His winning entry, emerged ahead of 113 other submissions to receive the grand prize award and a production grant of RM75,000.

The 25-year-old Line Producer who works at a local commercial production house, also walked away with an exclusive Sony Handycam? NEX-VG20E system worth RM15,000, which was awarded by Sony Malaysia.

"This year, the BMW Shorties hit a staggering 114 entry submissions, the highest ever received since its inception in 2007. It is an important milestone as five years on, we are proud to have evolved into a living platform where Malaysians not only explore their creativity but also their passion and commitment to giving voice on issues that matter to them most. The short film competition now continues to champion the best of Malaysia’s independent short films and also celebrate the best of the local arts, culture and talent,” said Geoffrey Briscoe, Managing Director of BMW Group Malaysia.

According to Briscoe, the response to this year’s BMW Shorties far exceeded their expectations and it was evident that participants made an effort to stretch their abilities to excel at all elements of film making. As such, the BMW Shorties 2011 judges were inspired to honour the quality of the participants’ work and unanimously decided to introduce a brand new award category to recognize the art of sound design. After much deliberation, the panel of judges presented the first ever Best Sound Design Award to Anne Lee for her excellent work in ‘Guang’.

The full list of award winners for the BMW Shorties 2011 are:

“We at BMW Group Malaysia would like to extend our fullest congratulations to all those who participated in this year's BMW Shorties. Even if they did not triumph, the countless hours spent to overcome the