"I’ve often heard people say: ‘I wonder what it would feel like to be on board a spaceship,’ and the answer is very simple. What does it feel like? That’s all we have ever experienced. We are all astronauts on a little spaceship called Earth." -R. Buckminster Fuller

Spaceship Earth, popularized in the mid-60's, was used Buckminster Fuller in the context of his primary concern- a vision for comprehensive planetary planning that resulted in new strategies intended to enable all of humanity to live with freedom, comfort and dignity, without negatively impacting the earth’s ecosystems or regenerative ability. He emphasized that the technology and know-how already exists, so that humanity can successfully surmount global challenges. Although, Spaceship Earth was often employed as a rhetoric device to emphasize the common plight of mankind and life, treating it as such would negate the rich meaning which this term has come to hold over time.

Fuller did not only dedicate a significant portion of his research and work to developing designs and strategies to improve humanity's overall capacity to sustainably exist on Earth, he went beyond and helped us reimagine the plane with his Dymaxion Air-Ocean World Map.

The Fuller Projection - A New View for the Millennium

All flat world map representations of the spherical globe contain some amount of distortion either in shape, area, distance or direction measurements. On the well known Mercator world map, Greenland appears to be three times its relative globe size and Antarctica appears as a long thin white strip along the bottom edge of the map. Even the popular Robinson Projection, used in many schools, still contains a large amount of area distortion with Greenland appearing 60 percent larger than its relative globe size. 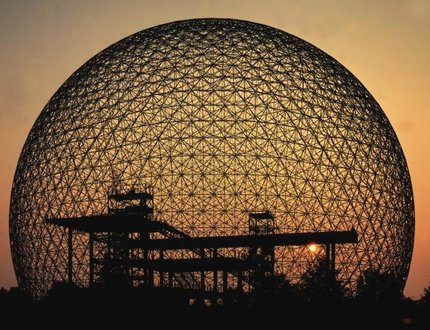